It is a common misconception that if a scaffold has a height to base ratio of 3:1 that it is stable and cannot fall over. This is false, if the scaffold is exposed to wind regardless of if it has containment or not, the 3:1 ratio is not sufficient and does not allow for the required maximum wind loading we need to design to.

This 3:1 rule was written into some codes of practice and standards produced in the 80’s and 90’s and has since been removed in the latest editions. While you may argue that a cyclonic wind event may only be 1:100 years, it can still happen as shown below.

Overall scaffold is transitioning to a more highly engineered product and there are ever increasing changes and requirements for full engineering design and for the scaffold to be designed to ultimate wind conditions. This is due to the many scaffolding collapses that are occurring from wind or poorly tied and braced scaffold. The single biggest issue is the codes and standards were mostly developed many years ago where containment was never a requirement and scaffolds are also being pushed to its limit’s height wise.

Unfortunately, a 37-year-old man has died after a freak accident while watching a football game in Brisbane’s north in July 2021. Emergency services were called to the incident where scaffolding, used by camera operators, had collapsed on him, leaving him with serious head and chest injuries. The injured man was rushed to hospital in a critical condition but was pronounced dead soon after arrival. (Note that this was not an Acrow scaffold). 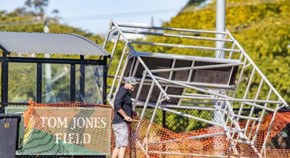 THINGS TO LOOK FOR

If a scaffold is free standing, seek advice from an engineer. This applies to the scaffold regardless if it has containment or not.

Please note that this advice and the comments herein are general in nature. If ever in doubt, please seek advice from an engineer.